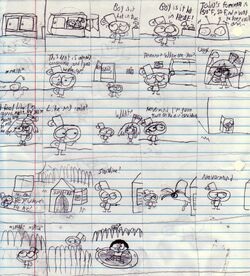 Mugman Vs. The Heat is a scrapped short of Mugman. Only 2 storyboards and an mp3 can be found of the cartoon.

Retrieved from "https://mugman.fandom.com/wiki/Mugman_Vs._The_Heat?oldid=3582"
Community content is available under CC-BY-SA unless otherwise noted.