Uncle Brewstein is the uncle of Mugman and Teanna. He was originally going to make his debut in "Uncle Brewstein's Visit", however, the cartoon was scrapped and never completed.

Brewstein is yellow like Mugman and Teanna, Has Purple Eyelids, wears a red long sleeve shirt, dark blue pants, black shoes and is missing an arm. It is assumed the mug on his head is filled with alcohol.

Brewstein is a drunk who causes trouble. 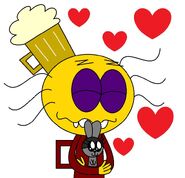 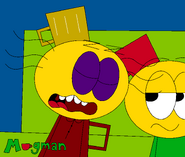 Brewstein Sleeping
Add a photo to this gallery
Retrieved from "https://mugman.fandom.com/wiki/Uncle_Brewstein?oldid=4078"
Community content is available under CC-BY-SA unless otherwise noted.